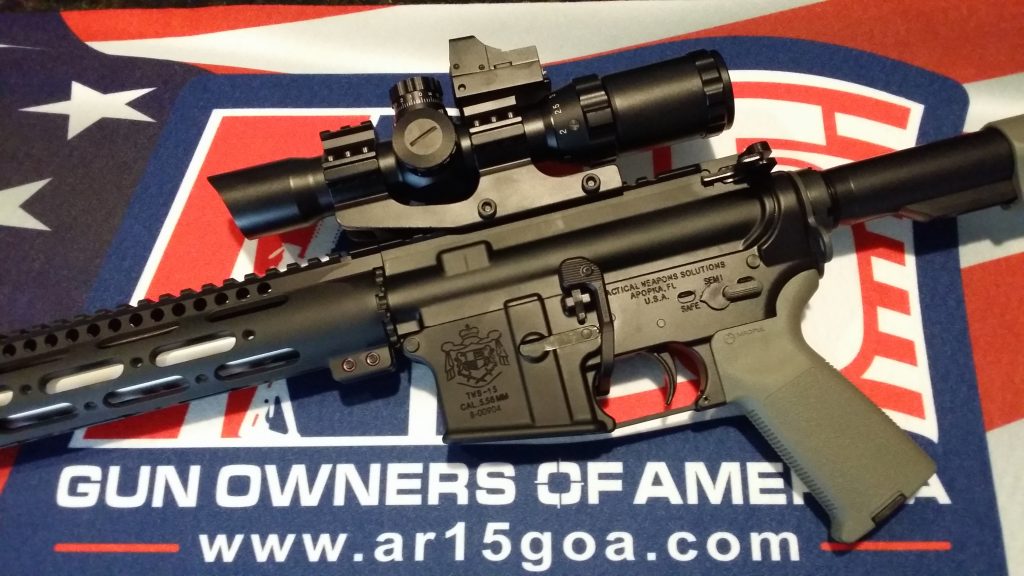 The History of the AR-15………The AR-15 is based on the 7.62 mm AR-10, designed by Eugene Stoner, Robert Fremont, and L. James Sullivan of the Fairchild ArmaLite corporation. The AR-15 was developed as a lighter, 5.56 mm version of the AR-10. The “AR” in all AR pattern rifles stands for Armalite, and can be found on many of the company’s firearms: AR-5 a .22 caliber rifle, the AR-7, another .22 caliber, the AR-17 shotgun, in addition to the AR-10 semi-automatic rifle.

ArmaLite sold its rights to the AR-10 and AR-15 to Colt in 1959. After a tour by Colt of the Far East, the first sale of AR-15s was made to Malaysia on September 30, 1959, with Colt’s manufacture of their first 300 AR-15s in December 1959. Colt marketed the AR-15 rifle to various military services around the world, including the U.S. Navy, Air Force, Army, and Marine Corps. The AR-15 was eventually adopted by the United States military under the designation M16. Colt continued to use the AR-15 trademark for its semi-automatic variants (AR-15, AR-15A2) which were marketed to civilian and law-enforcement customers. The original AR-15 was a very lightweight weapon, weighing less than 6 pounds with empty magazine. Later heavy-barrel versions of the civilian AR-15 can weigh upwards of 8.5 lb.

Today the AR-15 and its variations are manufactured by many companies and are popular among civilian shooters and law enforcement forces around the world due to their accuracy and modularity.

The trademark “AR15” or “AR-15” is registered to Colt Industries, which maintains that the term should only be used to refer to their products. Other AR-15 manufacturers make AR-15 clones marketed under separate designations, although colloquially these are sometimes referred to by the term AR-15.

Some notable features of the AR-15 include:

Semi-automatic AR-15s for sale to civilians are internally different from the full automatic M16, although nearly identical in external appearance. The hammer and trigger mechanisms are of a different design. The bolt carrier and internal lower receiver of semi-automatic versions are milled differently, so that the firing mechanisms are not interchangeable. This was done to satisfy United States Bureau of Alcohol, Tobacco, Firearms and Explosives (ATF) requirements that civilian weapons may not be easily convertible to full-automatic. In the late 1970s and early ’80s, items such as the “Drop In Auto Sear” or “lightning-link,” conversion to full automatic was very straightforward (sometimes requiring machining of the lower receiver with use of a lathe and M16 Bolt Carrier Group). Such modifications, unless using registered and transferable parts made prior to May 19, 1986, are illegal. (The Firearm Owners Protection Act in 1986 has redefined a machine gun to include individual components where a semi-automatic firearm can be converted to full-automatic based on a 1981 ATF ruling on machine gun parts.) Since 1993, The Bolt Carrier Groups used in AR-15 type rifles for civilians have employed additional measures to prevent modification to full auto. Colt AR-15’s use a metal alloy wall separating the Fire Control group from the Sear, preventing use of such items.

Automatic variants have a three-position rotating selective fire switch, allowing the operator to select between three modes: safe, semi-automatic, and either automatic or three-round burst, depending on model. Civilian Colt AR-15 models do not have three-round burst or automatic settings on the fire selector, though some other makers may mark that way for collectors and re-enactors, even though the guns will not fire in that mode. In semi-automatic only variants, the selector only rotates between safe and semi-automatic. Due to this, weapons modified to full automatic using a lightning-link are capable of full automatic fire only—unless a special full automatic fire select mechanism and modified selector-switch is substituted.

The AR-15 rifle is available in a wide range of configurations from a large number of manufacturers. These configurations range from short carbine-length models with features such as adjustable length stocks and optical sights, to heavy barrel models.

Due to the rifle’s modular design, one upper receiver can quickly and easily be substituted for another. There are many aftermarket upper receivers that incorporate barrels of different weights, lengths and calibers. Some available calibers for the AR-15 platform are the .223 Remington/5.56x45mm, .45 ACP, 5.7x28mm, 6.5 mm Grendel, .338 Lapua, 6.8 mm Remington SPC, .50 Beowulf, .50 BMG, and .458 SOCOM. It is not recommended to chamber the 5.56×45 NATO into a rifle designated .223 Remington, due to the increased chamber pressure in the 5.56mm cartridges; the two calibers are similar, but not identical.